BEST PRICE GUARANTEE BY BOOKING ON THE SITE OFFICIAL

This is the oldest, if not the only oil lamp tower on our coastline with its original architectural structure.

It is all a bit of a mystery, but it is estimated that it was built around the 15th or 16th century

Its name is first registered after 1902 - it was named the "Tour Blanche" (white tower) then the "Tour de Pénerf".

The tower is owned by the city council.

Listed as a Historic Monument in 1977, then restored and whitened, it once again carried out its role as a sea mark (fixed object very visible from the coast and used as a mark to sailors) 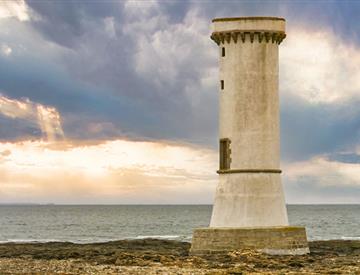